The nitty-gritty of running Domino Designer in Retina mode

I gave a teaser earlier, but now it’s time to get our hands dirty!

I’m running Parallels Desktop 8, earlier version works on a Macbook Pro Retina but you won’t get the full benefit. The reason is that you’re not able to run different resolutions in your VM (Virtual Machine) then what you’re using in OS X. That may, or may not, be an issue, but to me it’s a big drawback. There’s plenty of other reasons to upgrade (30% better performance is just one of them), so if you haven’t already upgraded – now is the time! Or is it..?

I eagerly jumped at the opportunity to snag the latest release of Parallels, but my upgrade path was to be… Well…  Less than stellar… When I initiated the upgrade of Parallels I had a suspended VM. That particular VM was running my entire work environment in Windows 7 64-bit Ultimate. Let’s just say it’s pretty crucial to my day-to-day work.

Now, I know what you’re saying. Of course I SHOULD have done a backup, but no one remembers a coward. Right? (Besides, sleeping is highly overrated..) Anywho! Maybe salivating over the spec from the latest release of Parallels drained my brain from vital fluids, I don’t know! But, to make a long story short: I didn’t make a backup of my precious VM!

Everything went fine with the upgrade, no warnings or anything. The problems began once I fired up my suspended VM once again. It started upgrading Parallel Tools, nothing strange there. Went fine. Rebooted. Windows opened three command prompts: 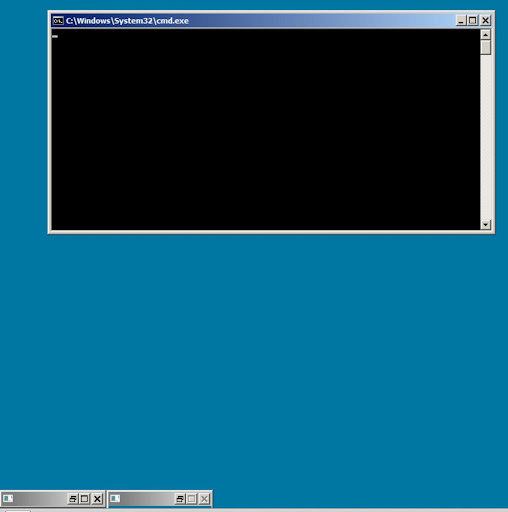 It just sits there – looking stupid…

And then…. Nothing. No CPU activity, no network traffic, nothing. So, the only thing left to do was to kill Windows and reboot.

Everything appeared fine, at first. But, when I tried starting Domino Designer it seemed to hang. But give it a good five minutes, or so, and it jumped back to life as if nothing ever happened. This wasn’t acceptable, so (after trying just about everything) I filed a support question here with Parallels. To date, nothing good has come of it…

But you’re not here because you like to stay within your comfort zone are you? You love to live on the bleeding edge! Be in the forefront of the action! A pioneer! “One small step for man… ” and all that! Ok, ok! I got a “bit” carried away there for a while. But it’s OK to get excited – we’ve arrived at the…

Eager to get everything working again I thought that this was as good a time as any to install Windows 8, instead of my ageing Windows 7 installation, a teeny-weeny bit to my surprise it went without issues(!). Started feeling cooky (again), but it was too be short-lived. Once my trusty Designer-client was fired up it looked like… Crap!

[Click the image below to view the Retina version. Be aware: it’s big @ 658KB] 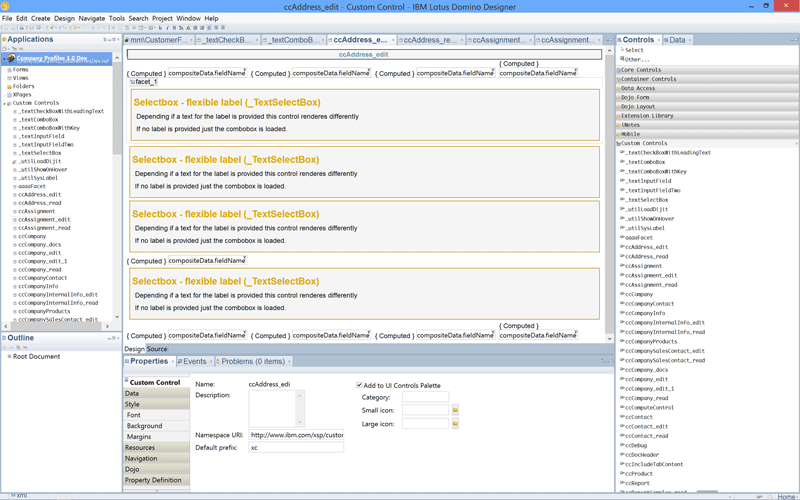 Not the screen real estate you were hoping for 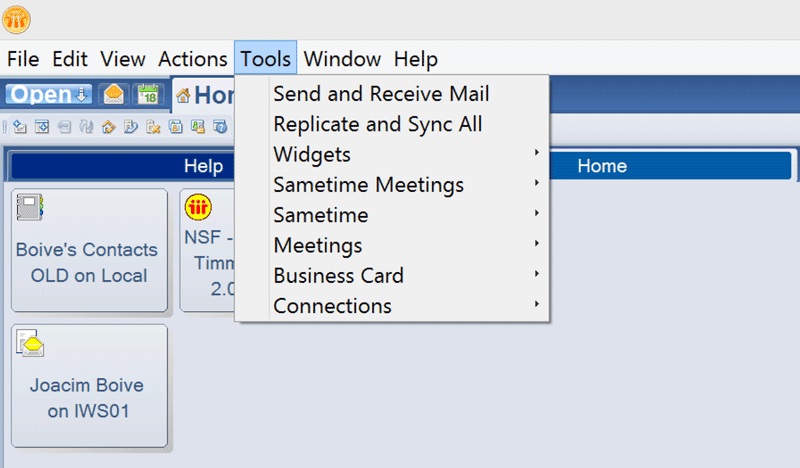 The Notes client is’nt much better 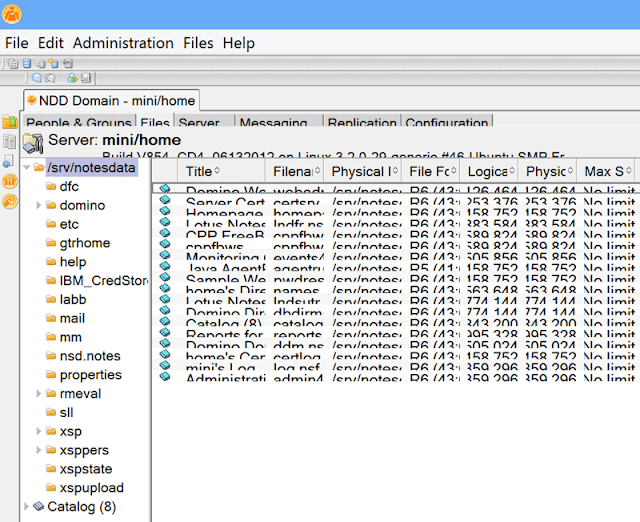 The admin client is unusable

Now this was not was I was expecting after my upgrade. But, fortunately, it’s a rather easy fix:

What we need to do first is disable “Optimize Windows for full resolution” under Parallels / Virtual Machine / Configure / Hardware / Video: 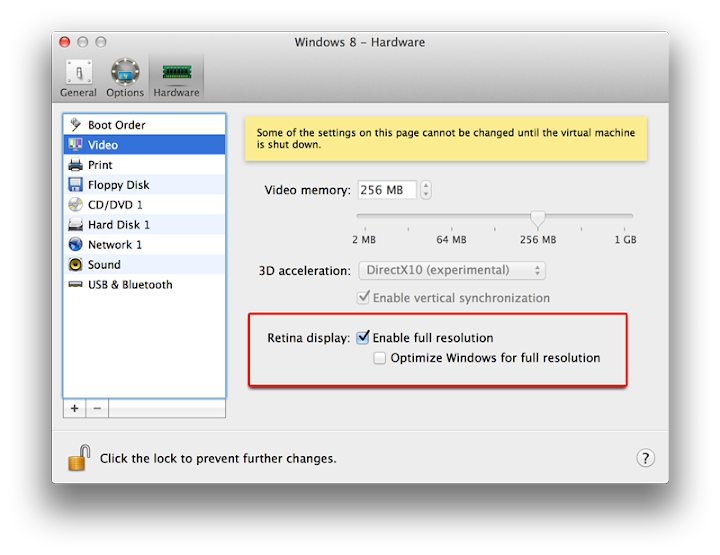 Make sure: “Optimize Windows for full resolution” is disabled

This allows us to manage the DPI settings under our host operating system (Windows 8, in my case) ourselves. Otherwise Parallels forces 199% DPI which doesn’t suit our needs very well… You need to reboot your VM, before the next step. It’s ok, I’ll wait…

… Done? Good! If the text now looks even weirder in your VM, don’t worry! We’re about to fix that. 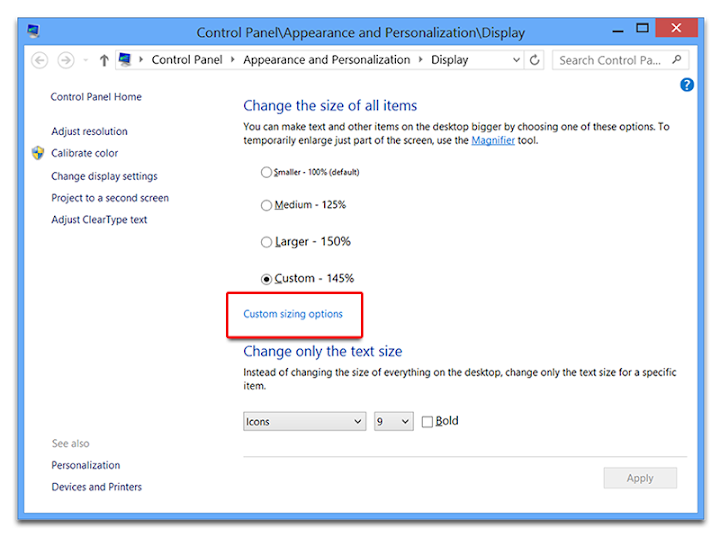 145 DPI is a good compromise

Click “Custom sizing options” and I suggest that you set it to 145%. I find it to be a good compromise, but feel free to test different values.

Here’s the instructions for:

As a reward for all your hard work, you should now be greeted by a much happier Lotus Notes client:

[Click the image below to view the Retina version. Be aware: it’s big @ 570KB] 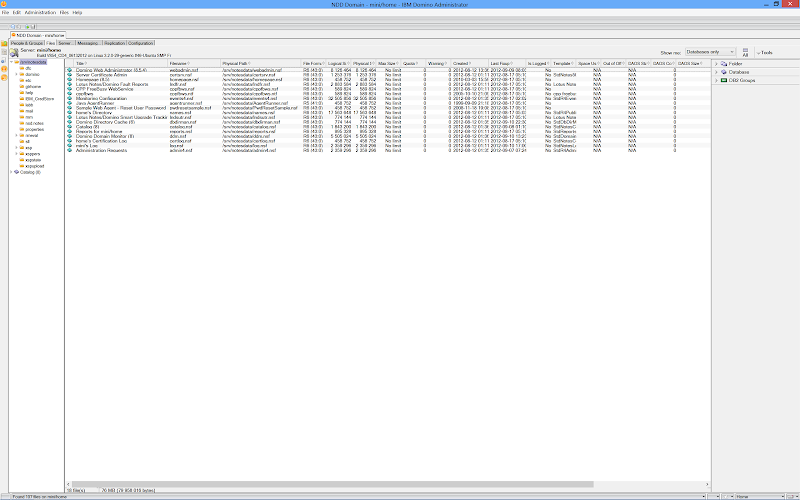 There you have it ladies and gentlemen!

So, we’ve managed to get manual control over the DPI settings by disabling “Optimize Windows for full resolution” in Parallels and we’ve adjusted the DPI setting to 145% (or there abouts) in our VMs.

Our work environment now starts to look pretty decent! But there’s more! In the next instalment we’ll have a look at some final tweaks to really make Lotus Notes shine (Yeah! I said it!) and how to manage themes to give your coding environment a big productivity boost! (At the very least it will look different)
Also, we’ll iron out some quirks that Parallels may reveal if you’re into Google Chrome.

Feel free to hit me back with any comments or questions below!